Please enter your email address below to reset your password.
An email will be sent to the address associated with the account:

Eau Claire, Wisconsin (April 25, 2017) – Rusoh, Inc, a wholly owned subsidiary of National Presto Industries, Inc. (NYSE: NPK) announced today that its new fire extinguisher, the Rusoh® Eliminator® , is now available for commercial sale. The extinguisher, shown below, is the first self-service, reloadable fire extinguisher and is expected to revolutionize the industry. The official public unveiling of the Rusoh® Eliminator® will occur at the Lucas Oil Stadium Booth # 9041 in Indianapolis, Indiana on April 27, 2017 at one of the premier events of the fire fighting industry, the Fire Department Instructors Conference (FDIC) International. 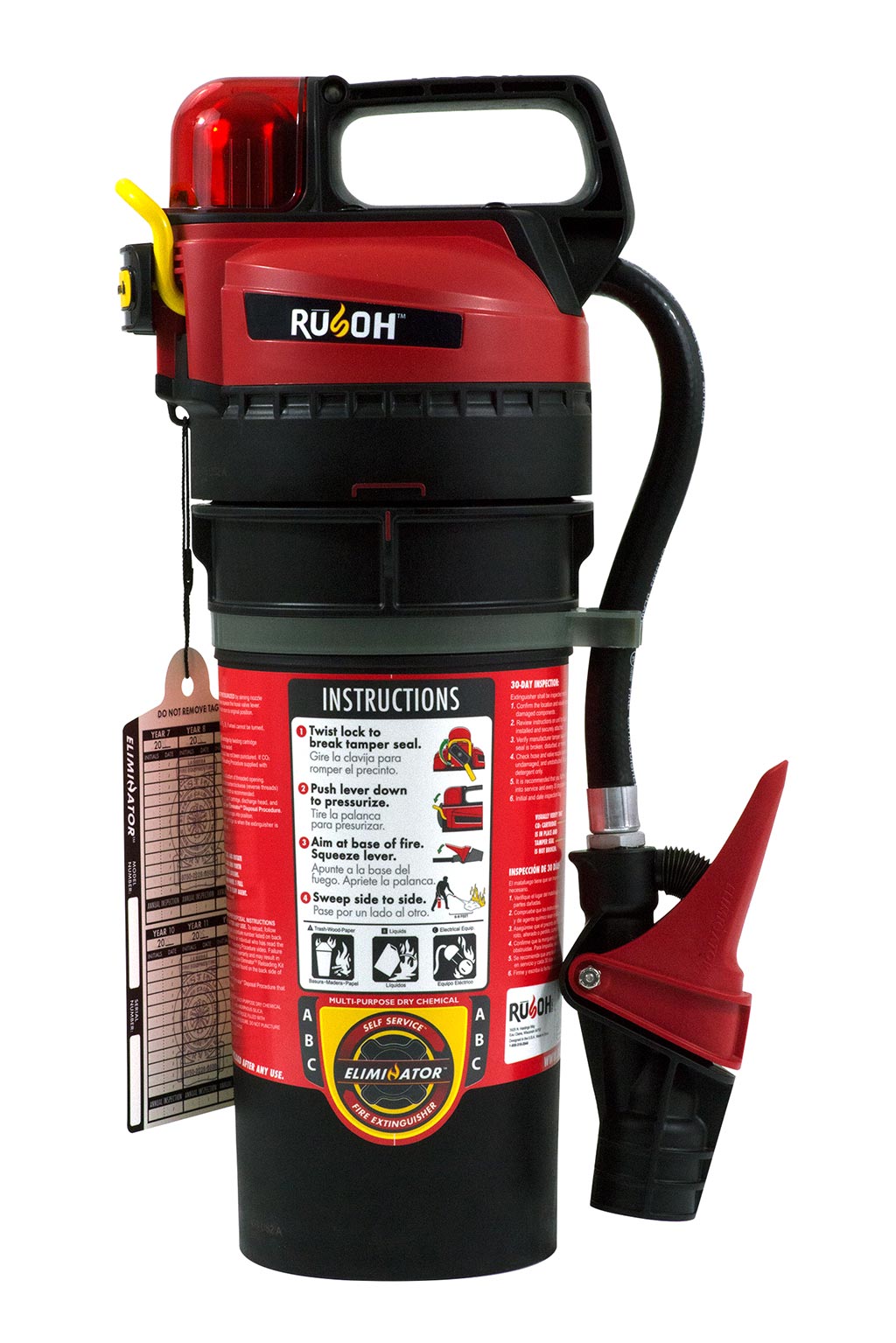 When asked about the product’s origin, Maryjo Cohen, President of Rusoh, Inc. stated, “The Rusoh® Eliminator® has a remarkable history. The product was invented by Randy Rousseau and his father. Rousseau is the owner of a second-generation fire extinguisher service business. While working in the field, he noted with concern that there were far too many extinguishers that were unlikely to work when needed or were themselves hazardous. He concluded that the industry was actually putting lives in danger, property at risk, and in the process, dislocating families and businesses. Rousseau and his father together resolved to invent a reliable fire extinguisher. They began by putting together a list of extinguisher issues. It turned out to be a very long list, which included the risks inherent with stored pressure cylinders: the integrity of the metal canister itself; faulty gauges; compacting and contamination of the dry chemical; and most of all, concerns about third party service industry abuses. They also noted major design flaws that make the traditional extinguishers awkward and inefficient to use--in particular during an emergency when panic is likely to set in.

Well aware that their invention could end the family’s business, the father and son nevertheless persisted in their resolve to invent a brand new extinguisher that would address every one of the problems on the list. Ultimately, they came up with a revolutionary design concept that did eliminate the problems, including the need for and cost of third party servicing. They patented their invention, calling it by two names: “the Eliminator® ” in recognition of their success in eliminating all issues and the “DIY Fire Extinguisher™ ” to highlight the fact that their extinguisher could be fully serviced and reloaded by a lay person.”

Cohen went on to say, “A great patented design concept is one thing. Developing a certified, commercial product in a highly regulated field like fire extinguishers is quite another. Meeting the rigorous tests mandated by Underwriters Laboratories (UL), in particular the tests required for a 3-A: 40-B: C rating, and securing the California Building Material Listing (BML) were particular challenges. The Rousseaus turned to Rusoh, Inc. for assistance and licensed their intellectual property to our company. We consider ourselves privileged to have participated in the process that turned their vision into reality. Likewise, we are most grateful for the opportunity to manufacture and market this wonderful innovation.”

When asked to comment, Randy Rousseau, the inventor, stated, “My dad and I began our invention more than sixteen years ago. It has been a very long sixteen years, but in the end the struggle has been worth every minute. The Rusoh® Eliminator® is the first major innovation in fire extinguisher technology in over sixty years. It eliminates every issue in the industry of which we are aware. Not only will users enjoy savings through the elimination of third party servicing costs, but more importantly, our invention will save lives as well as protect property. Our family couldn’t be more pleased or proud.”

More information on the product and the features that enable it to eliminate the innate problems of traditional extinguishers can be found at www.rusoh.com.

This release contains “forward looking statements” made pursuant to the safe harbor provision of the Private Securities Litigation Reform Act of 1995 that are subject to certain risks and uncertainties, as well as assumptions, that could cause actual results to differ materially from historical results and those presently anticipated or projected. In addition to the factors discussed above, other important risk factors are delineated in the Company’s various SEC filings.

The Future of Fire Protection is Here.